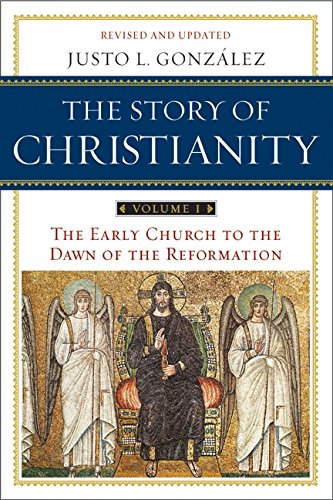 The Story of Christianity, Vol. 1: The Early Church to the Dawn of the Reformation

From Jesus to Christ: The Origins of the New Testament Images of Christ
Christian Theology: An Introduction

"Through the instrumentality of the Romans, the world is at peace. As a result, we walk on the highways without fear, and we sail wherever we want." - Irenaeus, Against Heresies 4.30.3, c. 180 CE

The Christian religion was born in Palestine, a small stretch of land on the eastern Mediterranean Sea. The Jews considered Palestine their Promised Land, but because of its desirable location it had been ruled by a succession of foreign powers for most of its history.

Egypt and Assyria fought over it for centuries, then Babylon conquered Assyria and Palestine with it. Next came the Persians led by Cyrus, who allowed the Jews to return to Palestine from exile, then the Greeks under Alexander the Great around 400 BCE. Rome took Jerusalem in 63 BCE, and Palestine was still under Roman rule at the time of Jesus' birth.

Despite the centuries of conflict in the region, Christianity developed in an atmosphere very conducive to the spread of religion. The earliest Christians noticed this, affirming that God had sent his Son "in the fullness of time."

The Pax Romana (Roman Peace) initiated by Caesar Augustus quelled crime, allowed for the development of roads throughout the Empire, and gave citizens the leisure to think about religious matters.

Christianity entered an environment already rich with religious diversity. First-century Roman Palestine offered the ancient religion of Judaism, the political religion of the Roman state, the personal religion of the mystery cults, and the intellectual and ethical schools of Greek philosophy.

The immediate religious context of Christianity was Judaism. Jesus, the apostles, and the earliest converts to Christianity were Jews and their teachings were presented in a Jewish context. The Judaism of Jesus' time was characterized by strict monotheism, a gradual shift from temple ritual to personal ethics, restlessness under foreign domination, a strong sense of community, and expectations of the coming of a messiah.

Christianity began as a movement within Judaism at a period when the Jews had long been under foreign influence and rule and had found in their religion (rather than in their politics or cultural achievements) the linchpin of their community. In Palestinian Judaism the predominant note was separation and exclusiveness.625

Several Jewish groups had formed by the time of Christ that held varying views on religious authority, certain theological issues, and the response to the Roman occupation. The Sadduccees were the most conservative group. They rejected the Oral Torah (the Talmud and other Jewish tradition and commentary) along with the doctrine of bodily resurrection, much of the beliefs about angels and demons held by other groups, and the doctrine of predestination. They focused on the temple ritual that had been practiced for centuries and tended to be on friendly terms with Roman authorities.

The Pharisees acknowledged the authority of both the Written and Oral Torah and focused on personal obedience of the Law over temple ritual. Though given a bad reputation due to Jesus' rebukes in the New Testament, the Pharisees were among the most observant and religious Jews of the time, and many were very pious.

The Essenes were a much smaller sect, but they have become well known since the discovery of the Dead Sea Scrolls that they are believed to have authored. The Essenes were an apocalyptic and ascetic group that emphasized extreme personal purity and remained separate from the rest of the Jewish community.

Various other small groups existed as well. Despite this diversity, however, the Judaism of Jesus' time was essentially unified by a devotion to one God, adherence to the Bible, emphasis on both Temple and Law, and eschatological hopes.627

Also highly significant to the religious context of Christianity were the pagan religions and philosophies of the Roman Empire. With the exception of Judaism, religion in the Greco-Roman world was marked by syncretism - that is, the easy exchange and borrowing of ideas and rituals between religious groups - so many of the pagan religions in existence in the time of Christ shared common characteristics with one another.

Nevertheless, distinct threads of pagan religious thought are clearly identifiable, the most prominent being the cults of the Roman state, the mystery religions, and the schools of Greek philosophy.

Cults of the Roman State

The Roman state cults were adopted from the Eastern pattern of deifying emperors and honoring the gods of individual cities. The cult of the emperor, which began with Augustus, was organized by the state and used primarily to reinforce and test political loyalty. Statues of Augustus were erected and rituals were developed to honor him, but the cult generated little religious feeling or personal belief.

The primary significance of the state cult for early Christianity was in its political uses, for many Christians (and Jews) refused to offer a sacrifice in honor Caesar and were persecuted heavily for it. Although actual personal belief in the divinity of Caesar was of little to no importance to Roman authorities, the unwillingness of monotheists to go through the ritual motions was taken as evidence of disloyalty to the Roman Empire.

The pagan mystery religions, named for their focus on secret knowledge and rituals available only to initiates, met the need for personal religious devotion that the state cult could not.

Mystery religions had become quite widespread by the time of Christ, but their characteristics are not entirely known due to their secretive nature and the lack of writings associated with them. What is known of the mystery religions has primarily been deduced from artwork, remains of temples and other archaeological discoveries.

A variety of mystery religions were practiced throughout the Empire, but most of them held in common a heavy element of secrecy, the use of syncretism in their belief and practice, and a focus on the death and resurrection of a savior-god.

Though some similarities are clear between these religions and Christianity (death and resurrection of a god, a ceremonial meal, etc.), scholars differ as to the level of influence the mystery religions exerted on early Christianity. Part of the difficulty is that the bulk of our knowledge of these pagan religions dates from the second century onward, and the mystery religions may have been influenced by Christianity by then.627 Also, the two religious movements flourished in the same cultural context, so it is possible their similarities are best explained not by dependence but in terms of parallel development.626

Especially as Christianity expanded beyond Palestine, it also came into contact with Greek philosophy, especially of the Platonic and Stoic varieties. Hellenistic thinking would become a significant influence on Christian thought, for most of the early church fathers were Greek-speaking Gentiles who had been trained in classical philosophy. Like the Hellenistic Jews before them, they believed classical philosophy to be compatible with the ancient teachings of Semitic monotheism, and even more with the teachings of Christianity.